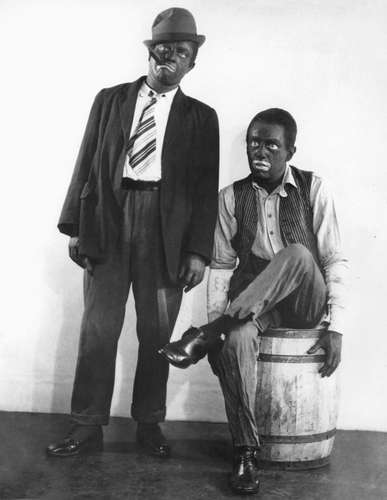 Listening to this clip nearly 90 years after its broadcast is an uncomfortable experience; the politics of cultural appropriation that govern our moment alienate contemporary listeners from Amos n’ Andy’s offensive depictions of Blackness, and yet the racial mimicry at play feels familiar. There is something haunting about the casual way Charles Correll and Freeman Gosden parrot a facsimile Black voice, not because this oral theft has gone away but because their historically situated racial performance does not hide its transgressions. Amos n’ Andy does not employ racial counterfeit with a knowing glint of getting way with taboo behavior, it simply does not recognize this racial play as being distasteful. In fact, Black audiences at the height of Amos n’ Andy’s popularity were split on whether this oral appropriation was a problem; at the same time that some activists called for it to be taken off the air, other organizations argued that the show represented Chicago’s Black community as a complex American subculture with stratified economic classes and intra-racial diversity (Ely 1991, 5). In comparison to its vaudeville and radio competitors like “Two Black Crows”, “Blue Coal Minstrels” and “Beulah”, Amos n’ Andy presented Black characters in coherent situations with punchlines that played around stereotypes of Blackness but ultimately avoided making their Blackness essential to the storyline (Ely 1991, 73).

When audiences listen to the election clip above today, the performance is chock full of violent myths degrading Black intelligence and obviously a powerful artifact of cultural appropriation, but audiences in 1928 would’ve identified many of the punchlines as in-jokes for a white, middle-class audience and heard the two white actors as authentic representations of Blackness. Correll and Gosden’s radio routine enjoyed unprecedented popularity with Black and white audiences, ran for 35 years, ushered in a renewed fervor for blackface performers on radio and even branched out to TV for a limited time in the early 1950s. But to understand how Amos n’ Andy was not just radio’s first blockbuster but also a considerably distinct departure from related blackface representations that came before it, it is important to start the history of radio more than a century before the first Amos n’ Andy broadcast with America’s first popular entertainment: minstrelsy.

Similar to the disconnect between this moment and the first era of broadcast radio, it is difficult for audiences in the digital age to fully comprehend how minstrelsy was the dominant cultural performance for most of the 19th Century. Though blackface clown characters persist throughout history across different cultures and signifiers, the minstrel show’s archetypes, structure and music marked America’s first truly unique theatre tradition, something that was distinct from British and European theatre at the time (Lott 2013, 30). And even though the imagery of the minstrel invoked a romantic plantation scene, it was Northern audiences that kickstarted its national rise in popularity beginning in 1828 when Thomas “Daddy” Rice returned to his hometown of New York. Having just returned from the Midwest with a group of traveling musicians, Rice had developed a song and dance routine mocking a disabled slave he had witnessed dancing while working. Rice’s character, “Jim Crow,” featured a blacked up Rice with patchy farmhand clothing and grotesque limber dances moves that mirrored the song’s instructional lyrics to “wheel about and turn around and Jump Jim Crow.”  Within just a few years, the Jim Crow character had become a national phenomenon and imitators recycled the blacked up character with new songs and dance moves, as well as formulaic casts of characters that each satirized and romanticized specific white myths about Black people. A New York Tribune review after the height of the minstrel show’s popularity (1846-1854) cites Rice’s “Jump Jim Crow” as the principle source of transforming everyday American life:

“It seemed as though the entire population had been bitten by the tarantula; in the parlor, in the kitchen, in the shop and in the street, Jim Crow monopolized public attention.”

(as quoted in Eric Lott’s Love and Theft).

The minstrel tradition’s themes, tropes and archetypes are so ingrained in 20th Century representations of Blackness that it’s difficult for us to reconcile T.D. Rice’s Jim Crow as a historically distinct intervention in the formations of racial identity. Clearly, previous to Rice’s performance, more than 200 years of slavery and colonialism had established a caste system based on racial markers and this history of economic symbiosis largely governed how Blackness was constructed in the white imagination. Before Rice’s Jim Crow, authors like James Fenimore Cooper and Washington Irving had laid the groundwork for representing the racial Other as dually savage and obedient, but the minstrel show represented a new kind of fetishization that expropriated racial markers with a unique transgressive desire that mirrored the populist politics of Andrew Jackson (Lott 2013, 9). A new white, working class gravitated to blackface minstrelsy with an unprecedented “desire to try on the accents of blackness,” giving birth to a new distortion of white male identity that not just recognized the color line as something to be crossed and reveled in the commodification of the racial Other (Lott 2013, 6). It was specifically the sonic qualities of the minstrel performance that made it so easily transgressive; much of the humor from the minstrel performance involved the oral lampooning of Black speech, from the lyrics of bawdy songs to monologues littered with malapropisms (Huggins 2007, 255). These characteristics of the minstrel show are best understood in the clip below. As the characters and cadences of blackface minstrelsy became more securely threaded into the tapestry of American history, the markers of racial identity began to become more unstable but more easily commodifiable, reproducible, and violent.

The weaponization of the minstrel show had increasingly political mechanisms leading up to the Civil War, both for abolitionists and anti-abolitionists alike. Harriet Beecher Stowe’s Uncle Tom’s Cabin (1952) demonstrates one example of the ambiguous power minstrelsy held in American political discourse; regardless of the abolitionist intentions and the sentimentalist reception of the novel, Uncle Tom’s Cabin was equally influenced by the archetypes of blackface minstrelsy as it was influenced by the lived experience of runaway slave Josiah Henson. Stowe’s work decried the evils of slavery and painted Southern whites as complacent devices in an unjust system, but her depictions of Black characters borrowed heavily from minstrel shows and songs that commodified Blackness as inherently child-like, self-sacrificing and ultimately as devices to please guilty whites. This appropriation of these tropes slips into a excuse for minstrelsy by positioning the performance as a form of disseminating a people’s culture, a common thread of scholarship around this time of obfuscating blackface performance as a crude but necessary diffusion of Black folk music, dialect and traditions (Lott 2013, 31). Therefore, even though Uncle Tom’s Cabin made an assertive argument for abolishing slavery, its underlying logic made it vulnerable for appropriation and manipulation from Southern minstrel performers who decided to keep the diminutive Black characters but repurpose them for reifying the structures of slavery (Ely 1991, 32 ). These performances became known as Tommers and they popularized the elderly Uncle Tom character as yet another puppet of racial representation that controlled how Black men were made legible to white audiences. Uncle Tom characters became to define minstrelsy so much so that its originator, T.D. Rice, spent his last performances portraying Uncle Tom instead of his trademark Jim Crow character. 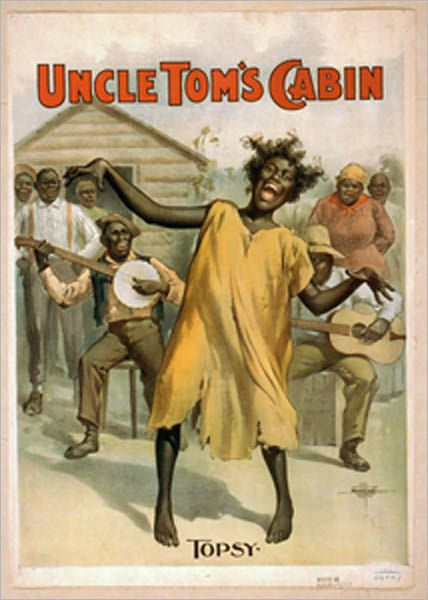 A poster for an Uncle Tom production.

And yet, amongst all these complex mechanisms of minstrelsy, the most important effect of early minstrelsy was its radical ability to define Blackness on socially constructed terms, training generations of white Americans to not just recognize race through the visual lens of characters like Jim Crow and Uncle Tom but also to hear Blackness as a oral identity that was up for grabs (Lott 2013, 37). The authenticity of any minstrel group was located in the vocal acrobatics that criss-crossed racial boundaries, not in producing a genuine Black voice from Black actors. This had significant ramifications for Black minstrels, who on top of reconciling the dizzying hurdles of cognitive dissonance to mimic a cultural appropriation of themselves must also display an authentic regurgitation legible for a white audience. Black minstrels could not simply perform the material of a minstrel routine but must follow the transgressive rituals of applying the burnt cork and code-switching into a less or more “black voice.” But with a Black subjectivity behind the blackface mask, the subtext of the racial performance could shift; Bert Williams and George Walker were the most emblematic of this limited form of expression, a Jim Crow/Zip Coon duo that still relied on self-ridicule but experimented with the minstrel formula and wrote characters that staged Black royalty and beauty (Huggins 2007, 282) For the first time, Black representation in popular culture could be seen performed by actual Black entertainers, a triumph for some and an even more troubling distortion of reality for others. The impacts of this duality between representation and referent began to shape how racial performance was staged and heard in everyday life, the blackface mask was a nationally accepted Black identity that “black men used to serve as a passport through white America.” (Nathan Huggins 2007, 11) In both the North and the South, white people’s interactions with Black people were imagined to behave in accord with the logic of the minstrel show, a “sonic color line” that prescribed public and private space decades before post-Reconstruction laws segregated with the de facto color line (Stoever 2016, 6). Minstrelsy was by no means simply a distasteful vestige of the past, it was a multi-generational network of performance, identity and representation that simultaneously set up a linguistic logic that commodified the Black voice but also tiptoed around the biological justifications for slavery.

It is therefore telling that the representations of Blackness in minstrelsy was the linguistic logic that Charles Correll and Freeman Gosden grew up with and made a career on before their introduction to radio. Though raised in different corners of the country, the two were rationalized as performers at a time that romanticized the Lost Cause of the Civil War more so than any other generation (Ely 1991, 16). Both born in the decade before the turn of the century, the two would’ve been raised on the same Tommer plays of the pre-Civil War minstrels and the “coon” songs of Stephen Foster, but would also have new representations of Blackness like D.W. Griffith’s The Birth of a Nation’s and the first wave of autonomous Black-owned institutions like fraternities and banks (Ely 1991, 20). The duo actually met directing minstrel shows for Joe Bren’s failing theatre troupe, playing the familiar roles of Jim Crow and Zip Coon despite minstrelsy’s relative decline in popularity (Ely 1991, 43). Looking for new ways to promote the duo’s vaudeville act, Correll and Gosden turned to the budding medium of radio in the early 1920s and were signed to WGN in Chicago for their blackface comedy routine (Ely 1991, 53). Though their first offering, Sam n’ Henry, was hardly different from their usual blackface characters, the show’s plot offered something new to radio audiences; despite its unpretentious production, the show essentially invented the genre of situational comedy, telling a serialized story every day through connected scenes that followed a pair of Southern Black men migrating to Chicago (Ely 1991, 54). The show became immediately popular not just in Chicago but as far as New York City, prompting Gosden and Correll to move to a bigger station (WMAQ) after just two years of making Sam n’ Henry. Changing the name of their characters to Amos and Andy, rewriting the storyline and distributing recordings to disparate stations nationwide, Amos n’ Andy had become a national sensation by the time NBC bought the license for the show in 1929 (Ely 1991, 60). Radio’s first serialized hit was an immediate success because of its relationship to the century of minstrelsy that preceded it, repackaging the oral representations of Blackness forged in theatre performance and adapting them for a new medium that divorced the visible markers of race from the identities it expropriated.

The Social Construction of Radio and the Civil Rights Movement →
1828 – 1928: Minstrelsy and Blackface Radio