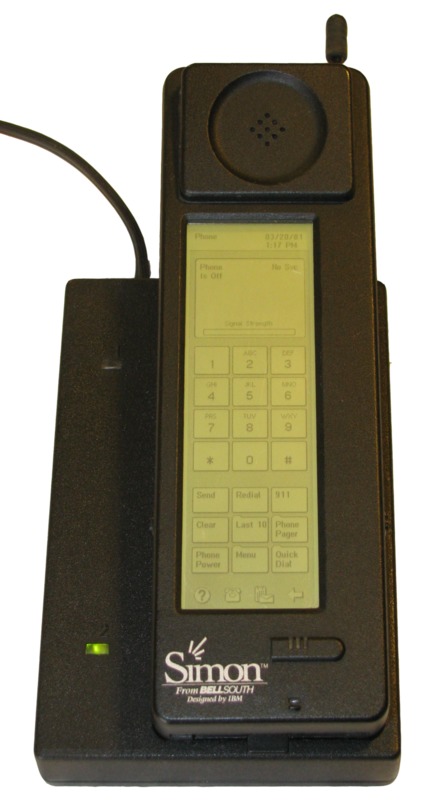 In late 20th Century, the development of the computer and the invention of the Internet brought advertising into a new world. On November 15, 1971, Intel 4004 was invented. This fourth generation of the computer, which is the generation we are working today, opened a new chapter for the modern life (Faggin, 1992). In 1989, an English scientist Tim Berners-Lee invented the world wide web (Mcpherson, 2009). The world wide web allows documents and other web resources being accessed via the internet and being interlinked by hypertext links. The invention of world wide web was of great significance to the development of advertising. Firstly, it provides people with a lot of information in a short period of time; secondly, it enables advertising to be spread by emails and websites, which provides a new way for advertising communication; thirdly, it allows for the efficient information sharing. With the rapid development of computer and world wide web, four years later, a more portable electronic equipment combining both advantages of computer and Internet appeared: the smartphone. The first smartphone in the world, which developed by IBM and BellSouth, came out to the public in 1994 (Fig 1.). Two years later, Nokia 9000 Communicator appeared in the market. The first massively adopted devices were developed by NTT DoCoMo in Japan (Pothitos, 2016). The early use of smartphone was still limited in professional needs including accessing email and sending faxes and mostly used by business people. The limitation of smartphone’s function, however, was soon broke thanks to the progress of internal operating system and wireless network capabilities. The popularity of smartphone reached a new height in 2007 when Apple released the first iPhone and revolutionarily changed the form of the smartphone. The first iPhone applied a large multi-touch capacitive touchscreen and got rid of the physical numeric keyboard; this innovative form soon dominated the smartphone market and continues to this day.

To discuss how the trend of smartphone and the information age influence the Chinese advertising industry in 21st Century, one significant date must be marked: December 11, 2001, when China officially became a member of WTO (World Trade Organization). To compliance with China’s market access commitment, after joining WTO, China drastically reduced its import tariffs on industrial products as well as agricultural products and increased the shares of foreign capital in the service industry. Once China actively opened the domestic market and devoted itself to the international market, foreign businessmen managed to explore China’s consumer market. Among various imported products, commodities in the field of telecommunication and Internet attracted a large number of Chinese consumers. According to Sautedé Eric and Peter Brown, “with 180 million fixed lines subscribers in 2001, China was placed second in the world in this category, behind the United States, and leader for the number of mobile phone subscribers—145 million at the end of 2001”(2002). In recent 10 years, Chinese consumers’ enthusiasm toward Apple’s products made China the most promising region for Apple’s revenue growth. According to the statistics updated by Apple in February 2018, the company’s “combined fiscal first-quarter revenue increased 11 percent from mainland China, Hong Kong, and Taiwan, up from US$16.2 billion in the same period a year ago” (South China Morning Post, 2018).

The popularity of smartphones and electronic products such as MP3, iPad, and Kindle among the middle class in China predicts the new trend and strategy of advertising in 21st Century. Firstly, Internet has become the largest advertising media, more and more merchants are tended to put their advertisements online. Being in an age of information explosion, most of the people in China are used to receiving information from social media and Internet. Compared to traditional advertising media like newspaper and magazine, mobile applications which are popular in recent years have attracted more attention in contemporary China. For example, Wechat, an online all-purpose mobile application, is equipped with the function of advertising. Almost all major newspapers in China have created their Wechat subscription, people can easily get their daily articles by subscribing for free. Since people nowadays are no longer paying for the paper newspapers and magazines, these agencies manage to earn profits by putting advertising at the end of the articles they push on Wechat. Not only newspapers, various brands start to transfer their advertisements from television to Wechat subscription. Once a consumer follows a brand’s subscription, he/she can get sale information and the release of a new product the first time. According to the figures provided by GroupM, the world’s largest advertising media company, “about 57.2% of ad spend in China will go toward the internet this year, compared to 19.4% five years ago” (Doland, 2017). Although television used to be “the largest advertising medium in China” (Cheng, 2009), advertising expenditure on traditional TV has been keeping a downward trend since 2016 according to GroupM.

In addition to the uprising of online advertising, advertising in China is stepping into a more international stage. China’s huge consumer market has attracted many foreign brands. To promote their products in China, these companies will recruit local advertising producers to Sinicize their original advertising or develop a new idea which is more catering to the Chinese market. Nike’s new TV advertisement You Only HBL Once, for example, was created by Nike’s Shanghai agency Wieden + Kennedy. To “elevate its high school basketball league (HBL) to a level” (bestadsontv, 2018), Nike's Shanghai agency combines the idea of HBL and China’s college entrance examination system. Influenced by the trend of globalization, Chinese local advertising producers are also hiring foreigners to act in their commercials. One of the Chinese most competitive smartphone brands, Huawei, released a new commercial named For Yourself in 2018 (Video 1.), which adopted a feminist theme and hired actresses from the different culture to perform in this commercial.

Looking back to the evolution of Chinese advertising in nearly 200 years, the development of technology introduced many new choices of mediums into advertising field, while social changes and cultural factors determined how these mediums function. Advertising agencies are always finding the balance between their profits and customers’ needs. Advertising master Leo Burnett once said: “The work of an advertising agency is warmly and immediately human. It deals with human needs, wants, dreams and hopes. Its 'product' cannot be turned out on an assembly line” (Rieck, 2018). Even though, advertising will not stop its pace of progress as long as human society continues its development.