Localization: The Development of Chinese Photography in the Republic era 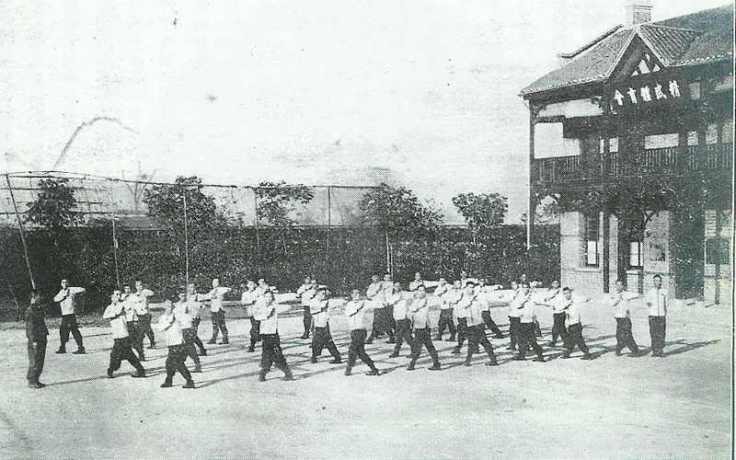 If someone wants to know how to make a center thing, he probably needs to know how to use it. After the establishment of the Republic of China, Chinese people started to learn how to use cameras. During the late Qing, the photography skills were controlled by foreign or family in the royal court. After the establishment of the Republic of China, other people in China had the chance to use cameras. It triggered the first photography department in China, the Chin Woo photography department.

The Chinese first photography department, Chin Woo Photography department, belonged to the Chin Woo Athletic Association. The Association is an international martial arts organization founded in 1910. As one of the first public martial arts institutes in China, Jing Wu was intended to create a structured environment for teaching and learning martial arts as opposed to the secretive training that had been common in the past (Roberts 2013). The founders of Jing Wu felt that the association would keep alive the traditional martial arts skill and strength people's body in defending the country. The basic curriculum drew from several styles of martial arts, giving practitioners a well-rounded martial background. After the basic training, the practitioner could choose whatever they wished to specialize in. Sun Yat-sen, the founder of the Republic of China, attended the third annual event held by Jing Wu in 1915, giving a speech of encouragement to the attendees (Morris 2004). At that time, the photograph was one of the best propaganda machines, so they created a department to propagate their ideology. However, this photography department mainly focused on propagating Chin Woo spirits. They were not intended to develop photography skills. 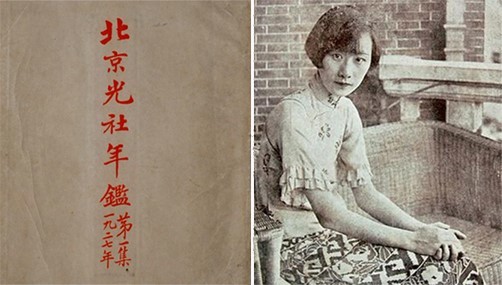 1928 Almanac and Its Coverpage

In 1919, photographers in Peking university hold a photography exhibition. After that, they thought it was necessary to create a photography association to help people improve their skills and make better pictures. A few years later, the association formed in 1923 under the name of Research Association for Art Photography. By 1924 the group, which at its peak numbered about twenty members, had begun to organize yearly exhibitions that attracted as many as five thousand visitors and in the press occasioned considerable critical discussion about photography’s artistic merits (Kent 2013). One of those advocates in the association was Liu Bannong. As a teenager, Liu had acquired a rudimentary knowledge of photography, and he developed a passionate interest in it while studying in Paris (Kent 2013). After assuming the position at Beijing University, Liu became one of the most active members in the Light Society. In 1927, he published his book Bannong’s Comments on Photography, which is the earliest sustained discussion of photography as a fine art in China (Kent 2013). 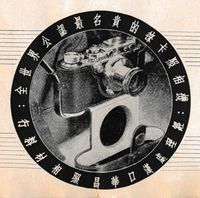 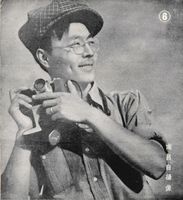 Wei NanChang with His Leica Camera

During the era of the Republic of China, Shanghai was the center of photographic activity since the end of the 1920s. There were many cameras sold in Shanghai. At that time, One of the best selling camera in China was the Leica Camera. As you can see the advertisement of the Lecia camera on the right. Around the circle, it wrote "Leica camera: the rarest camera in the world." Inside the circle, the poster displayed the camera with its cover. It is a very attractive advertisement at that time and many photographers in Shanghai love it. Also, in other Leica advertisements, it told customers how to distinguish the true Leica camera and this kind of guide was unusual at that time in China (Zhao 2017). As a result, it is not surprised why Leica camera was so popular in the 40s.

Among all the Leica cameras which sold in China, the most popular one in this period was the Leica III. The Leica III is a camera made by Leica in 1933 and produced in parallel with the Leica II series. Compare to the Leica II, Leica III has significant improvements. It has a faster neck strap, more ranges of shutter speeds and some improvement on optical system (Camerapedia). As the Leica III sold in China few years after it invented, it soon became the best equipment for Chinese photographers (Roberts 2013). One of the most famous Leica fans is Wei Nanchang. He was one of the best photographers in China at that time, who believed the Lecia is the best camera in the world. Nanchang is famous for his skills in photography. He published many books about photography skills and inspired many people to study photography (Zhao 2011). The photo on the right is Wei Nanchang and his Leica camera. This photo is Wei's selfie. The words on the right said, "Photo by Nanchang." This picture is more likely an artistic photo because Wei dressed very fancy. At that time, wearing glasses was a privilege for intellectuals in China. Like today, people always connect glasses with knowledge and intelligence. For this reason, many intellectuals in Shanghai like to wear a pair of glasses to show their identity. Moreover, the flat cap and the shirt with the pocket were also a standard suite for wealthy citizens in Shanghai (Wu 2016).

The development of the photography theory in the 30s triggered the prosperity of the Chinese journalism. At that time, there were many outstanding journalists in China. They produced many impressive photography and articles. Some of them even got the chance to go aboard and became war correspondent. Xiao Qian was a famous essayist, editor, journalist, and translator. During the World War II, Qian was in London and witnessed the London Blitz. He wrote several reports about how people in London fought against Nazi Germany (Song 2016). On the right is one of his report, which posted on a famous newspaper in China. As Qian reports back to China, Chinese people noticed they were not alone in fighting against the Axis powers. It inspired Chinese people to fight against the Japnese invasion and gained the victory.

Zheng Chonglan and the SELO camera

The Founding Ceremony of the Nation 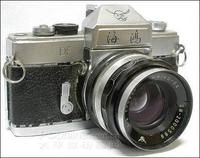 After the establishment of the People Republic of China, the environment for Chinese photography changed dramatically. Since the PRC was in Soviet front, the United States and other Western European countries stopped the trade with China. That means China cannot import any photography equipment from the West. Meanwhile, many fields in China need the productions of photography industry like the camera. For this reason, it is necessary for China to establish its own photography industry. Because of the weak industrial fundamental and the Korean War, the PRC did not start the process on photography industry until 1956. By the help of the Soviet Union, China strength its industrial power and produce the first film camera in 1956 (Tencent 2009). During the 60s, Chinese photography industry made some achievements. For example, the Seagull DF camera on the right was the best camera for China in the 60s. The Seagull is the brand name used from 1964 by several camera factories situated in the Shanghai region. This camera single-lens reflex camera presented in 1964. The "DF" is the abbreviation  "Dan Fan" (The Chinese name for Single-lens reflex camera). It is the first Chinese single-lens reflex camera in Chinese history. However, the Seagull DF was the copy of a Minolta SR-2 which presented in 1958 (Tencent 2009). It is still a long process for China to catch up with the West.