Photo Took by "Others": Chinese Photography During the Late Qing 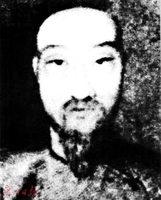 After the First Opium War in 1840, the gate of China was opened by the Western powers. Photography arrived in China together with colonial expansion. China lost the war and comprised with the Western power. The first portrait in China is the portrait of Keying (Qiying) in 1844, which was during the negotiation after the war. Keying is a Manchu statesman who conducted the settlement of the First Opium War with the British and other western powers between 1843 and 1847. In the negotiation, he noticed the power of the Western world. He wanted to learn from the West and reform the old empire. The first step he made was to take a photo. Keying's portrait became the first portrait in China. Sadly, the Emperor forced him to kill himself, only because the Emperor thought Keying shamed the name of the Empire and the royal family. The photography was still an uncommon item in China except for the members of the royal family in South China. 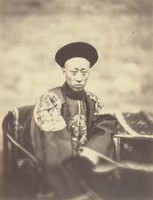 The situation changed significantly around 1860. If the First Opium War in the early 1840s brought photography to China, the Second Opium War from 1856 to 1860 occasioned systematic photographic documentation of China and Chinese people (Wu 2016).  As Felice Beato came to China with the British army, he went to all over China and opened a photography studio in Guangzhou. Felix Beato opened the first photographic studio in China in 1860, after the Second Opium War. Beato is an experienced expert on photography. His work provides images of such events as the Indian Rebellion of 1857 and the Second Opium War and represents the first substantial body of photojournalism (Lacoste 2010). He mostly served for foreign and few nobles in China. Just like French novelist Balzac, many Chinese people thought the camera steals a part of the soul. However, there were some Chinese nobles wanted to try new things and went to the studio to take a picture.

When Beato in Beijing, he took a photo for Princes Kung, who is the brother of the Emperor of China. This image showed the advantage of the daguerreotype. Among the distinctive features of the daguerreotype is her superior quality of outline. The good quality is because all the picture plane is solid silver and there is not any grain on the top of print (Coe 1978). The image quality is substantially better than paper, or perhaps film. The portrait of Princes Kung is an excellent example of high-quality daguerreotype process picture. The daguerreotype process is ideally suitable for portraiture, and this portrait proves it. Moreover, another favorable symptomatic is that daguerreotypes, at the same time delicate and fragile, could last forever if correctly conserved (Coe 1978). This conserved image still looks like the photo takes in the last second. 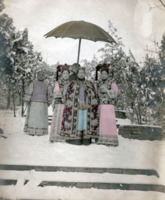 In the late 19th century, China was controlled by Empress Dowager Cixi. The Empress, who was curious about Western inventions, such as photography. However, she was also afraid of photography because she did not understand the technology behind it. Even after fifty years, photography was still a new thing for Chinese people. Like Balzac, most Chinese thought the camera would take people’s soul. At first, Cixi refused to take photos. However, the Boxer Rebellion changed her attitude.

China suffered great failure after the Boxer Rebellion. China paid a large reparation to eight countries and Empress Cixi became an infamous figure in the Western world (Robert 2013). She wanted to use her real image to rehabilitate her reputation. She granted Yu Xunling as the royal photographer in the court. When Xunling was young, he had the chance to study photography in France (Wu 2016). He took many photos for the royal court and those images became valuable archives. Yu Xunling is the first known Chinese photographer. His title marked Chinese noble class accepted the science of photography. In some way, it also is an accompaniment in the process of Modernization.

Meanwhile, Empress Cixi thought the black-and-white photography cannot win the favor of the Westerns. She wanted to colorize her image to the world. At that time, a colorized photo was a very expansive process (Coe 1978). Cixi thought her reputation was much more valuable than money. As a result, she commented the royal painter to colorized photos whose took by Xunling. The tinted photo of Cixi was a good try for China to modify daguerreotype process photography. Indeed, this kind of process was also popular in Europe. However, for tinted photographs, their colors are not dependent on the actual colors of the objects photographed and may be very inaccurate or completely arbitrary (Coote 1993). For this reason, as you can see, this photo for Empress Cixi and her retinue looked very strange. The color with the pale face made them look like characters in the horror movie. The tinted photo changed the opinion of the West, at least Cixi was not the figure in the newspaper.