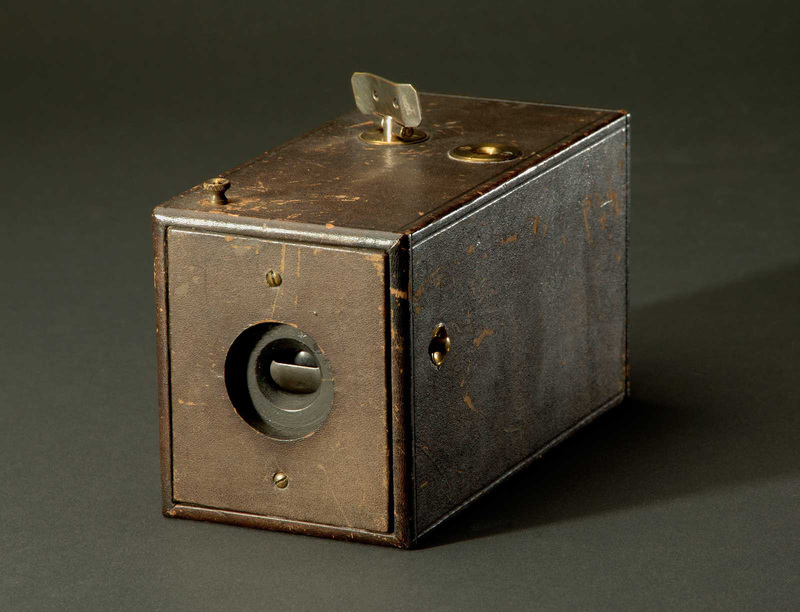 With the development of George Eastman’s paper film came the first Kodak camera. In 1886, Eastman got a patent to incorporate the roll holder he had developed with William H. Walker into a camera (“Milestones”). Patent 6950 describes the Kodak camera: “Consists of a rectangular box, in one end of which an instantaneous shutter is fitted, and in the other a roller slide” (Pritchard 2014).

The film could be threaded through the roll holder and allowed for 100 6.4cm exposures. These multiple exposures made taking pictures easier than the complicated and cumbersome wet-plate process, eliminating the need to carry glass plates individually back and forth from a darkroom. Not only did Eastman provide an easier way to take pictures, but he also implemented a print service. The Kodak was sold with film already loaded inside. Once the roll was exhausted, the camera owner could return the Kodak to a dealer or the factory where the film would be developed and printed for a fee of $10. The camera was reloaded with negative paper film and returned to the owner along with the 70mm circular prints. The owner simply had to take photographs and send the camera to the printer. The Kodak sales slogan emphasized just how easy the process was: “You Press the Button, We do the Rest” (Pritchard 2014; Coe 1988).

The Kodak was simply constructed—a wooden box covered in leather—and cost $25. It measured 3 ¼ x 3 ¾ x 6 ½ inches, making the Kodak the first handheld camera. The Kodak had a sector type, or rotating, shutter and a manual winder that fitted new parts of the film behind the lens (Fig. 3). The periscopic lens, consisting of two parallel convex lenses, allowed the photographer to focus on subjects a meter away without any professional knowledge. The Kodak camera introduced a more inclusive photographic world and is often referred to as the beginning of popular photography. All the photographer had to do was hold the camera, release the shutter, and turn the winder (Pritchard 2014; Coe 1988). Advertisements boasted, “Anybody who can wind a watch can use the Kodak Camera” (Fig. 2). 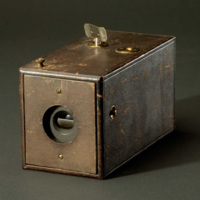 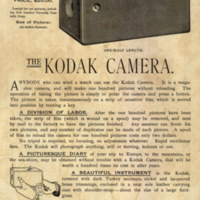 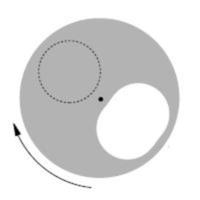