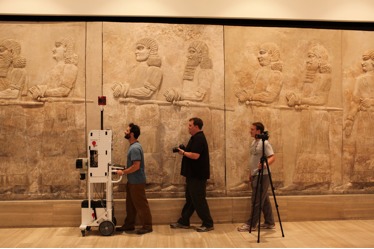 The Google Street View trolley, now one of five image-capturing devices that make up Google’s ‘fleet’ has been extremely valuable to the museum world as institutions continue to ameliorate their presence and relevance on the Internet platform. The Street View technology allows viewers to enter a space at street level and virtually interact as if they were there in person. In addition to museums providing staged imagery of their galleries, virtual tours through street view allowing the users to have autonomy of their ‘visit’ just like an in-person experience.

In 2003, Google founder Larry Page wanted to expand on early interactive movie map projects and experiment with capturing street level imagery on a broader scale. Working through several prototypes, the engineers settled on a system of cameras that would provide panoramic mosaics rather than using high-speed videos. The technology launched in 2007, with four US cities, but has quickly grown to include more than 40 countries and 5 million miles of road, trails, and paths. The Street View Trolley, a smaller cart-like device that condenses the entire image-capturing system even further fits through hallways and doors, making this additional indoor footage possible. The device was first introduced in 2009 and captured the interior of Iraq’s National Museum (Figure 1).

The camera technology mounted to the top of the Street View car has been significantly refined since the first prototype. While Google has built its own camera system, it is similar to the Dodeca 2360 camera system (Figure 2). The 360°, full motion camera ‘head’ is based on the shape of the dodecahedron, a 12-sided sphere, and contains 11 high-resolution cameras. The field of view on a camera such as the Dodeca 2360 is roughly 92% of a sphere—360° horizontal and 290° vertical. Comparable to the Google process, once these images are captured, they are stitched together using stitching software to make seamless panoramas for the user to navigate through. Helpful to this process is the use of lasers and GPS systems in addition to the camera, both of which are also condensed and contained in the trolley. The laser range-finding capability allows for a more accurate understanding of the distance and angle between the camera and the object—especially crucial to the accuracy of interior panoramas in which viewers can look up. With the data from these lasers, the images can recalibrate according to the navigator such that the image doesn’t get distorted beyond recognition.

Google’s camera technology continues to evolve, both in accuracy and resolution. They have also made a concerted effort to provide imagery of increasingly remote locals, including museums and even the White House (Figure 3-4). Aside from the Google Art Project, the interiors of major museums and cultural landmarks around the world are accessible via Google Maps. 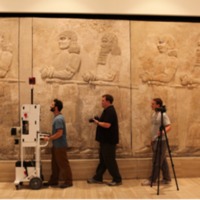 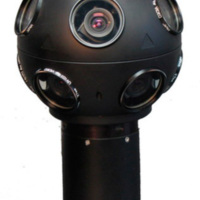 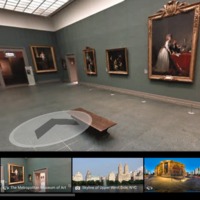 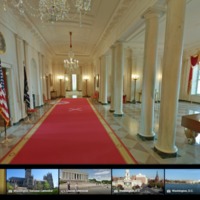