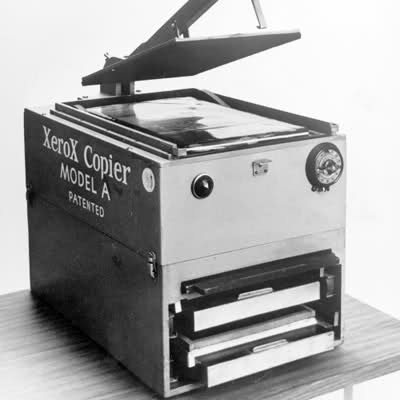 The Xerox or photocopying machine, frequently used to publish pamphlets and zines before the internet became a popular consumer product, uses xerography to copy images from one piece of paper to others. One of the great benefits of the process described below is that the contrast was between light and dark, meaning that if you put many layers together, it would flatten them into one. This allowed for a very simply layout procedure: the pamphleteer simply cut out and placed the sections where he wanted them to go, on top of the page, even overlapping each other. Upon copying in a photocopier, they appeared in copies as one smooth image, rather than the layered effect created in the original layout. Xerography uses electrostatic charge to imprint via photoconductive material – anyone who has used a Xerox machine is all too familiar with the blinding white light that scans across the surface of the paper. A cylindrical drum is charged electrostatically. The drum is coated in photoconductive material. Photoconductivity is semiconductivity that is triggered by the light. A semiconductor conducts electricity – it moves electricity along a pathway. In this case, electricity is moved through the drum when it is exposed to bright light. Most people who have used a Xerox machine know all about that bright light. What that light does is reflect off any white areas on the document onto the drum, which causes the electrostatic charge. Since the drum is coated in photoconductive material, the parts of the drum that the light reflects on become positively charged, and the parts that are not reflected on stay negatively charged. The ink – called toner – has a positive charge, and therefore when it is released, it is attracted to the negatively charged areas of the cylindrical drum. The toner on the cylindrical drum therefore has the shame shape as the text and images on a white sheet of paper, and it is transferred to new pages (called “bonding”) via heat and pressure rollers. The first electrocharged full color photocopier came out in 1973, released by Xerox. Standard consumer Xerox machines are capable of producing 20-30 pages per minute. Today, some consumer photocopying machines have moved to digital technologies – instead of using the electrocharged drum, they use scanners and laser printers. Since Xerox machines were the first to make photocopying a consumer process, many people refer to photocopying machines generally as “Xerox” machines. This is just an expression of consumer culture, Xerox is a brand name. 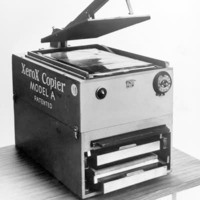 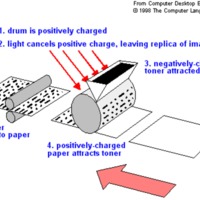