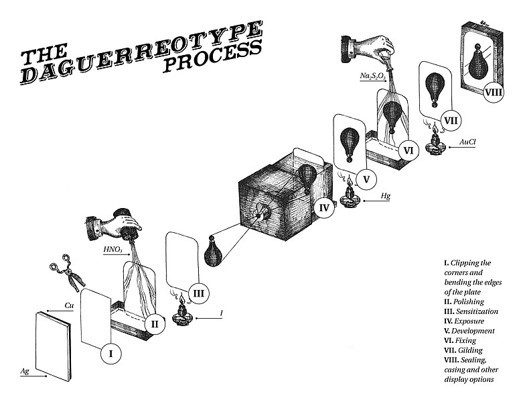 The daguerreotype is first publicly available photographic process. Louis-Jacques-Mandé Daguerre invented the Daguerreotype in 1839, and its invention can be thought of as the birth of photography. Daguerreotpes are sharply defined, highly reflective, one-of-a-kind photographs on a silver-coated copper plate, packaged behind glass and kept in protective cases (Taschen 738). The process behind the Daguerreotype was developed in collaboration with Nicéphore Niépce, a French inventor that was the first to make a permanent photographic image or “heliograph”. Niépce died in 1833 though, leaving Daguerre to perfect the process by himself for most of the 1830s in Paris. The Daguerreotype essentially united properties of chemistry and optics, “permitting the light itself to draw the image”. Ultimately, it was an invention of a completely new medium and artistic form. Upon the announcement of the Daguerreotype’s completion by the French Academy of Science in January of 1839, “the French government purchased the formula for the public’s use, and while both Isidore [Nicéphore Niépce’s son] and Daguerre received lifetime government pensions, it was Daguerre’s name that become associated with the invention”. The French government decided to present it as a gift from France to the “free world”, and so in August of that same year, complete working instructions on how to make daguerreotypes was publicly disclosed by the Academy of Science and “Daguerreotypemania” captured the world as the daguerreotype positioned itself as the premier method of making photographs.

The daguerreotype method is very complicated and delicate process. This process is also the first photography process arrived in China.

To make a daguerreotype photography, people need to use a silver-plated copper plate as the background. First, people need to polish the silver plate with wax until it looks like a mirror.

Then the plate is sensitized to light over iodine and bromine in specialized, light-proof boxes. After the cover of the plate becomes yellow-rose in appearance, people need to transfer the plate via a light-proof holder into a camera. Then, it the process of the explosion.
Originally, this exposure could take as long as fifteen minutes, but improvements to the sensitization process (adding silver halides) and better lenses eventually dropped that number below one minute (Cade 2013). Finally, once the plate is exposed, the plate developed over hot mercury, fixed by immersion in a solution of sodium thiosulfate and then washed with distilled water. The final step is to tone or gild the plate using gold chloride, yielding.

However, when daguerreotype arrived in China, it took a long time to expose and develop. For example, when Keying, a Chinese official, who waited for two hours for the hole daguerreotype process (Bennett 2013). However, it still was the best method in China at that time. First, it was easy to acquire materials for the process. Silver is the currency in Qing empire and wax is a common item in China. Meanwhile, since the photo was made by the sliver, it was easy for people to preserve it. More importantly, the royal family in China like the sliver photography which could show their identity (Wu 2016). 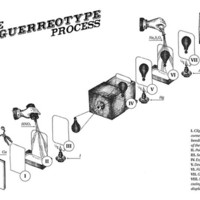