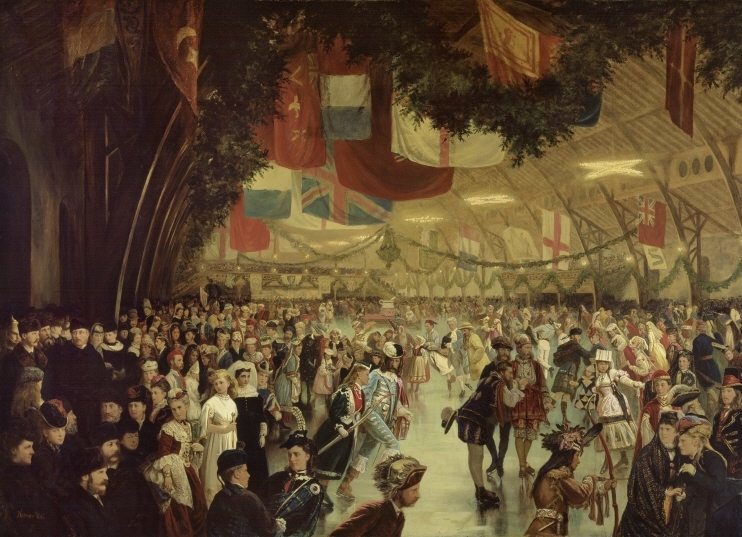 Early sports photography relied heavily on techniques of composite photography and imagery. Prior to 1874, imagery related to sport was primarily artistic and highly aestheticized. Composite photography allowed photographers to combine images of sport (often taken in photographic studios rather than at the venues in which the sports were played) with manufactured (often painted) backgrounds in order to convey stylized grandeur. The inability to reliably capture the motion or scale of sport using existing photographic methods directly led to the academic study and commercial improvement of techniques and equipment relating to photography.

One of the leaders in composite photography was Scottish photographer William Notman, whose work in Montréal in the late 1800s was often documentary in nature and related to social sporting events. In the photograph seen here, Skating Carnival (1870), Notman attempted to document what was essentially a costume ball on ice skates as realistically as possible without ever actually photographing the event itself.


"[Notman] advertised in the paper, inviting anyone who had attended the March affair to his studio where they put on their outfit and skates and struck a pose, as directed by Notman. One hundred and fifty people showed up in response to his request: “I have therefore selected this opportunity as one offering many advantages, to carry out what has long been my intention; To get up an effective PICTURE OF THE RINK, for which purpose I beg to request that you will give me an early sitting, before or as soon after the event as possible, in the Costume you intend to use on the occasion.” The composite photograph was then projected onto a canvas coated with photo-emulsion for several hours and then fixed and washed. The developed photograph was then tacked like a painting onto a stretcher and hand painted by two artists, Henry Sandham and Edward Sharpe. What must have been the social event of the season, a novel costume ball at an ice rink, was then captured forever in living color" (Willette). 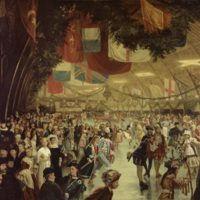