The early nineteenth century was the ‘golden age of the guitar’ due to its use in Viennese Classical music. The first book of guitar notation was published during this age in 1820, ensuring that its classical practice, technique, and melodies could be passed on in standardized from. The guitar's golden age began to decline, however, as Romantic Period musical ideas began to privilege instruments with more dynamic range than the guitar, such as the violin and the piano. During this decline, American designers took the acoustic guitar—with its sound chamber, wooden fretted neck, and strings made of cat gut, wire, or silk—and abandoned the ornate and delicate designs of elite European taste in exchange for a sturdier, simpler, and more economically and aesthetically accessible version for interested middle-class American players.

Between 1830 and 1850, the acoustic became the symbol of the rising middle class. Between 1850 and 1880, the commercialization of the piano and the ‘smear campaigns’ undertaken by white banjo apologists who attempted to associate the acoustic guitar with Black Americans and the banjo with White Americans in an attempt to devalue the guitar and privilege the banjo as an ‘elite’ instrument led to a decline in the guitar’s middle class popularity. Black musicians began to pick up the guitar as a result of these market changes, which then highlighted debates about how one learns to play an instrument as an indication of one’s social class. Does one learn to play from musical notation (an ‘elite musician/social practice), or playing by ear (a popular, rural, ‘black,’ folk method)?

In the early twentieth century, many classical guitarists sought to reestablish the guitar as an elite instrument and to save it from what they considered to be brainless folkloric amusement. The emergence of jazz music helped the guitar’s cause, since one could play jazzier chords on the guitar than one could on the banjo. The need to amplify the guitar so it could be heard within a jazz big band would lead to the emergence of the electric guitar in the 1930s. 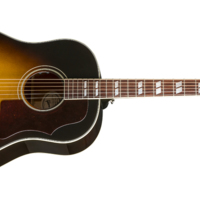