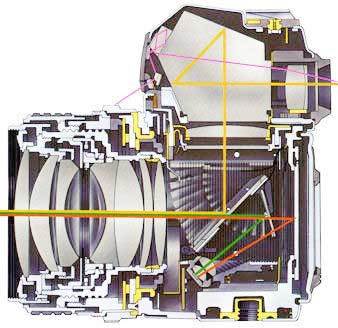 While optical viewfinders have long since been a crucial tool in photography regardless of the genre, one distinct improvement that made them more significant in capturing action photographs in particular was the their movement to an eye-level position. However, what makes the 1950s an especially important decade is that it marks the moment in time in which the optical viewfinder began to become incorporated into the body of the camera in a systemic way, rather than existing as an external attachment. By moving the viewfinder from its previous home at waist-level (and later lightly above the body of the camera), photographers were able to hold the camera tightly to their own face, which was remarkably helpful in creating stability and accurately adjusting the focus of the lens.

Optical viewfinders use a system of mirrors inside the body of the camera to offer an image preview, which photographers view by pressing their face to the camera (rather than viewing an electronic display). The image seen here shows the optical light path of a single-lens reflex camera. Its parts include the camera lens, the mirror, and the glass pentaprism. The screen can also be seen just above the mirror, and to the far right is the eyepiece, through which the photographer sees the live preview of their image.The yellow path represents the journey of the preview image, which is seen through the lens, bounces off the mirror, and is flipped and uprighted by the pentaprism. The green and red lines reflect how the image is exposed onto the film in the camera when the shutter is released.

In more recent years, optical viewfinders have been phased out of many DSLR models, with manufacturers preferring electronic viewfinders. However, sports photographers tend to favor those with viewfinders as opposed to those with only LCD preview screens, which are comparatively low-resolution and have a slight delay between the image its previews and the action occurring in front of the lens. On modern DLSR hybrid cameras that contain both electronic and optical viewfinders, the latter will use “through the lens” technology to display exactly what image will be projected onto the camera’s sensor. Having access to a real-time image preview is crucial, especially for sports photographers, to whom a fraction of a second can be incredibly important in capturing an iconic image. The additional clarity that optical viewfinders offer over electronic models is also preferred by sports photojournalists. 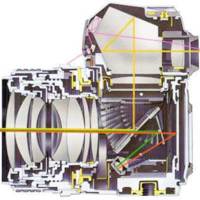