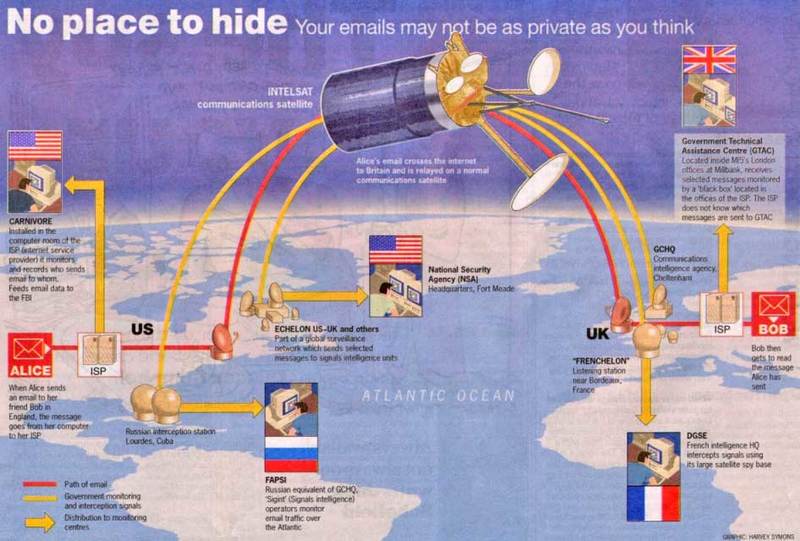 ECHELON, also knows as the Five Eyes, is a SIGINT collection and analysis network secretly established by the United States and the other signatory nations to the UKUSA Security Agreement: Australia, Canada, New Zealand, and the United Kingdom. The ECHELON surveillance system is a continuation of the work of Project SHAMROCK, furthering the work of establishing a global network of listening posts and software which uses communication satellites to control the collection and distribution of civilian telecommunications traffic. The NSA, Project SHAMROCK, and ECHELON were all super-secret, highly classified undertakings before being revealed to the public by whistleblowers. In 1972, former NSA analyst Perry Fellwock revealed the existence of the surveillance network and detailed several joint CIA-NSA black ops. In 1982, investigative journalist James Bamford published The Puzzle Palace, an expose of Project SHAMROCK. In 1988, Lockheed employee and NSA sub-contracter Margaret Newsham revealed that the targeting of individuals was designed into the communications network itself. And in 2013, Edward Snowden again revealed that the internal security apparatus had never been dismantled, only gone underground. ECHELON has been shrouded in such secrecy that its very existence has been difficult for critics to prove. At the time of a 2001 European Parliament invenstigation of the program’s capabilities and political implications, the US government still refused to admit that ECHELON even existed. The investigation was able to determine that ECHELON was part of an umbrella program collecting and processing data from communications satellites established by the NSA in 1966. It also concluded that ECHELON is a method of sorting captured signal traffic, rather than a comprehensive analysis tool (Schmid). The NSA is a centralized flow of information which becomes actionable through the might and collaboration of other agencies. Though ECHELON requires the cooperation of major communications companies, it remained a poorly kept secret until Snowden’s documents finally confirmed its existence. The foundation of the ECHELON network is the International Telecommunications Satellite Organisation (Intelstat), which was established in 1964 by dozens of countries who jointly own and operate a global constellation of communications satellites. Shortly thereafter, various countries began operating secret signal stations to intecept satellite communications passing over the oceans. In 1981, the NSA started the construction of the first gobal wide area network (WAN). In principle, with the cooperation of the other members of the UKUSA Security agreement, ECHELON’s global coverage was absolute. Though ECHELON is still usually associated with satellite interception, the role of satellites in point-to-point communications has been supplanted by fiber optics, which carry 99% of the world’s long-distance voice and data traffic. These cables are physically tapped deep undersea and in communications hubs such as the AT&T offices in San Francisco. 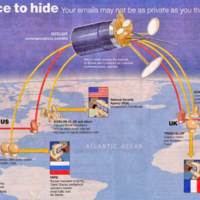