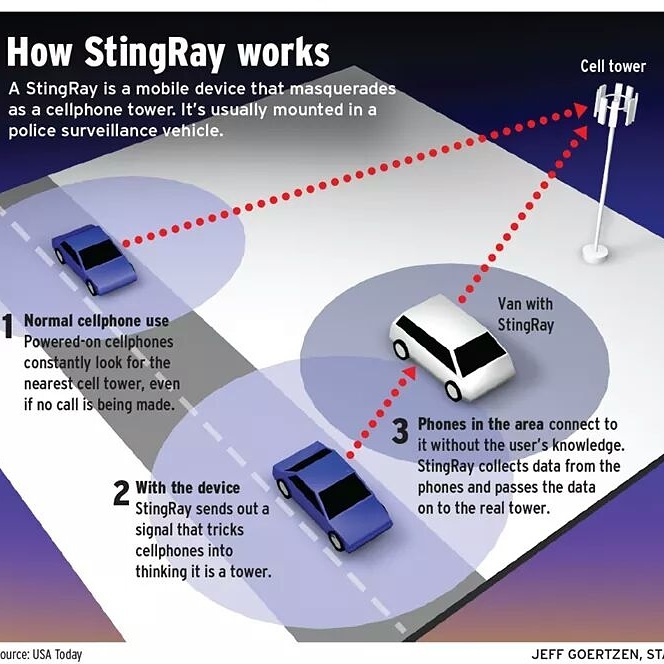 An International Mobile Subscriber Identity-catcher, or IMSI-catcher, is a device that acts as a fake mobile tower between a cell phone and its service provider’s real towers, known as a man-in-the-middle (MITM) attack. IMSI-catchers intercept tracking location data of mobile phone users, and can therefore be used by law enforcement to identify all the people within a circumscribed area. This is a particular threat to protestors, whose rights are protected under the first amendment but not their identities, if they are in public. The widely used StingRay device allows governments to identify individuals through their political activities and establish official profiles on them onto which they can append information received later. To call these tactics wiretaps is misleading. Though the StingRay uses electronic communications networks, it is only interested in the GPS metadata of cell phone signals. As with a letter sent through the United States Postal Service, the sender and recipient of a message are considered public information, including their location. In this way, strangers who share political opinions can be linked through "paper deviance" as associates in the same subversive group. The use of a StingRay allows attendance of public gatherings to become incriminating evidence, a logic mirrored in the increasing militarization of protest policing. Our Special Weapons and Tactics (SWAT) teams were trained by the pioneers of modern paramilitary counterinsurgency, the Israeli Defense Forces, on how to break protests. The recent massacre of protestors in Gaza is an example of this framework taken to its logical and physical extreme. 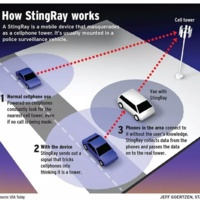