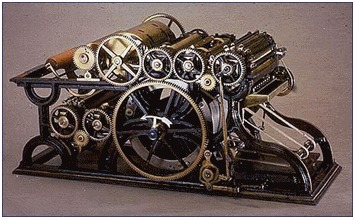 At the turn of the 19th Century, the invention of the steam-powered printing press by Fredrich Koenig doubled the speed at which newspapers could be printed by hand – 800 sheets/hour. American, Richard Hoe created the lithographic Rotary Printing Press [see entry under Advertising in China], which mounted type on a rolling cylinder and could print 8000 sheets per hour, but it was William Bullock who, after the Civil War, took printing to a new level of production that – along with the reach of the new Intercontinental Rail Network – propelled the growth of national print advertising.

William Bullock filed the first patent for his Web Rotary Printing Press in 1863, but continued to refine his machine for the next decade. Unlike Hoe’s machine, Bullock’s new press continuously fed large rolls of paper through the rollers, completely eliminating any need for a man to feed the machine. In addition to reducing the expense of labor, it worked at great speed, could print on both sides, and could even fold and cut the paper -- processing up to 12,000 sheets/hour in the beginning, and ultimately getting up to 30,000 sheets/hour.

Always hands on, Bullock’s last patent for his press was filed posthumously in 1875: When one of his machines jammed in 1867, Bullock tried to fix it, got his arm caught, was rushed into surgery, and unfortunately died of complications a few days later. 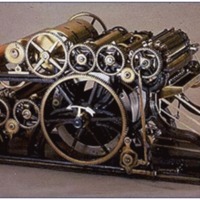