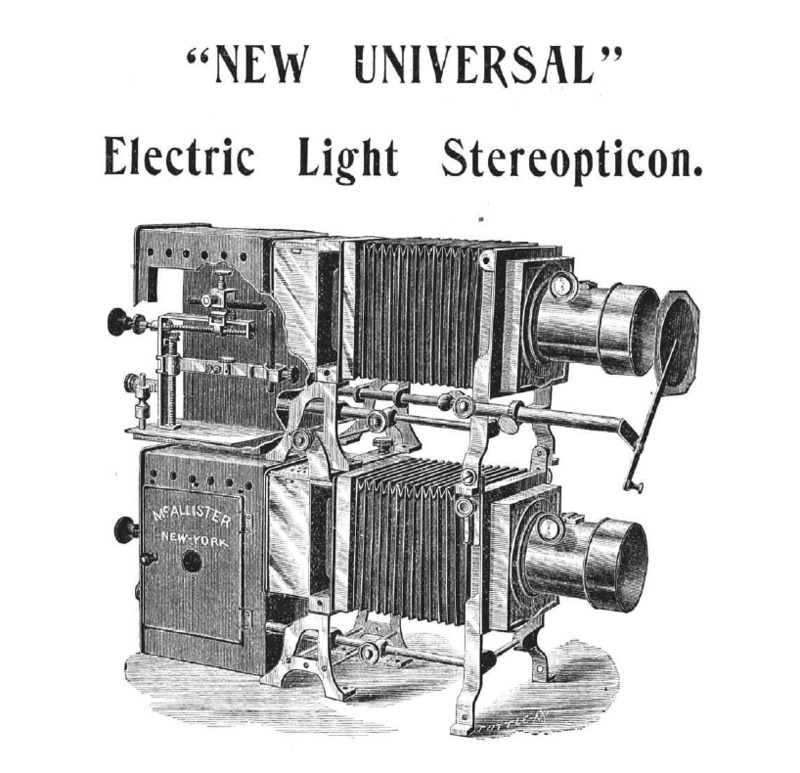 After the invention of the incandescent light bulb, the use of projection devices began to shift away from oil and gas-powered contraptions such as the traditional magic lantern. The variant of this lantern device that used an incandescent bulb became known as the electric stereopticon, and essentially operated on the same principle as its lantern predecessor. A stereopticon with two lenses would be angled in such a way that the two identical images dissolved together from a distance, creating an illusion of depth. As in later motion picture projectors, the images projected were illuminated by an electric light bulb. Slides were changed manually.

As noted in a 2008 issue of The Magic Lantern Gazette, distinctions between the terminology used to describe these devices has always been muddled. Initially, stereopticon was used to describe to a device with two separate lenses that project together to produce a stereographic image, similar to the effect when using a handheld Holmes stereoscope. However, as author Kentwood D. Well states,

"Once the initial novelty of 'The Stereopticon' wore off, the term quickly fell into more generic use as a name for a great variety of models of improved magic lanterns. As the term “stereopticon” became commonplace, the capitalization of the word generally faded away in periodical articles. The term was widely used both for single projectors and for double or triple projectors used to show dissolving views. (Wells 2008, 8)"

He goes on to note that one notable manufacturer reserved the title “stereopticon” for those devices that used electricity, whereas others were designated “lantern.”

Regardless of confusion surrounding terminology, the introduction of the electric stereopticon resulted in a significant uptick in illuminated slide use within American classrooms (Shepard 1987, 105). Commercial outlets sold slide sets geared toward various educational uses and specific subjects, but lending libraries—often housed as part of university pedagogy schools—proliferated as well. As an 1899 column in the periodical School Education notes, teachers and schools even began to send photographs off to have slide sets specifically made, whether of a vacation or specific plant worth studying (Shaffer 1899, 35). In a refrain that becomes commonplace with each new introduction of a classroom audiovisual aid, proponents of the stereopticon lauded the benefits of viewing images versus the written word for comprehension purposes (Swain 1902, 146).
Sources
Schaffer, Jennie. “The Stereopticon in the Schoolroom.” School Education, December 1899. 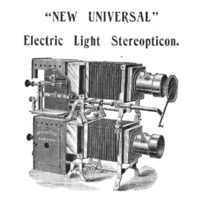