The Musical Instrument Digital Interface (MIDI) protocol was first developed in 1981, through the collaborative efforts of Roland-founder Ikutaro Kakehashi, Oberheim Electronics-founder Tom Oberheim, and Sequential Circuits president Dave Smith. The need for the creation of MIDI arose from a lack of any standardized method for allowing electronic instruments from different manufacturers to be able to communicate with one another. MIDI, itself, consists of event messages that can be then sent to another instrument, or recorded with a MIDI sequencer, giving it information on how the sound should be generated, including velocity, panning, vibrato, pitch, notation, and clock signals (which set the tempo). The basic MIDI protocol has been continuously developed and elaborated since its inception, growing to include more expressive information, MIDI Time Codes, MIDI Tuning Standards (to allow information to reconcile with tuning outside of the standard A = 440hz pitch), and MIDI Show Control, which enables the use of MIDI to synchronize and coordinate information common to stage production and museum exhibitions, such as lighting, motion controllers, and pyrotechnics, to name a few.

The use of MIDI is integral to sampling, as its signal information can be used to manipulate and modulate any form of audio, so long as the audio is recorded into an interface that can be triggered by MIDI commands. This makes it possible for the information to be easily converted to use by alternative instruments to form complementary musical sections, or be completely re-arranged without the need to re-record it – from scratch – on a new instrument. MIDI also played a large role in revitalizing the recording industry throughout the 1980s by opening up so many new possibilities for recording and production. By introducing the capacity for audio to be assigned to individual “notes,” and then triggered by a MIDI controller, the process of sampling began a critical new phase in which it was no longer bound by any linear limitations, allowing for endless recombination and rearranging. 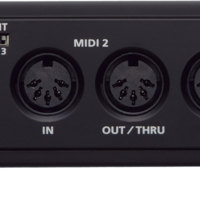