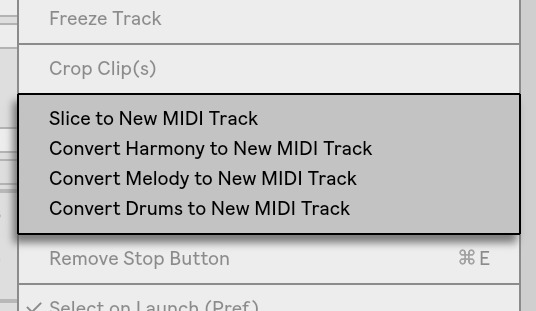 Creator
Ableton (in this iteration)
Date(s)
2014
Tags
Sampling: A Historical Overview of the Democratization of Music

The capacity to convert audio files into MIDI functions has been a continuous development over the last several decades. The Digital Audio Workstation (DAW) Ableton – which has been in heavy use with musicians of a variety of genres since its creation in 2001 – recently introduced a version of the process in version 10 of its software. Ableton became widely known for its audio analysis and warping algorithms, which allowed audio files to be extensively manipulated in both pitch and time-stretching, without extensive formant or bit-depth loss, compared to other DAWs on the market. Ableton breaks down their Audio-to-MIDI conversion into three different processes: harmony conversion, melody conversion, and drum conversion, each utilizing a distinct analysis algorithm. These conversion processes take the possibilities first introduced by assigning recorded audio to MIDI and invert them, while simultaneously bringing the process full-circle. With this, one can take an existing audio file (e.g., a melody played on a guitar) and convert it into its constitutive MIDI information, signals, and commands. Put another way, it’s like taking all of the information about how to play a musical part (in the way that sheet music conveys this information), extracting it from the raw audio, converting it into a package of that information, and being able to apply it to any new virtual instrument. This is, perhaps, the first time that any automated or digital process has become functionally available for sampling in the form of interpolation (replaying/re-recording an existing piece of music while still being recognizable as having a relationship to an original part). Interpolation is a more complex form of sampling, from a legal perspective, but it involves representing existing creative information nonetheless. Audio-to-MIDI conversion has the potential to completely change how we think of the way audio is represented, as well as having substantial implications for creative ownership of musical information. 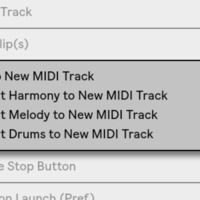