Tokenization is a process of replacing sensitive data with non-sensitive data, so as to protect the information of cardholders, merchants and issuers during online payment. While the concept of tokenization has long existed since the first currency systems emerged centuries ago, the modern concept of Payment Tokenization was first released by EMVCo in 2014, and now being used in POS, digital wallet, NFC application, QR Code etc.

Comparing with traditional encryption technology, tokens are created through random algorithms, which made them impossible to be reversed or to be linked back to any original payment data or personal sensitive information. These randomly-gathered tokens are the most valuable benefit for everyone involving in the payment. Moreover, when adopting this technology to credit card, personal data will not be threatened by internal and external risks that could otherwise occur during payment processing. Because when payment credentials are tokenized, the processor of payment decodes the data, so that the process of the payment was secured. The process is as followed: when using a credit card, the customer’s primary account number (PAN) will be replaced by a series of randomly-generated numbers, which is called the “token”. These tokens can then be passed through the internet or the various wireless networks needed to process the payment without actual bank details being exposed. The actual bank account number is therefore held safe in a secure token vault.

On November 9, 2016, the People's Bank of China published the Technical Standard of Payment Tokenization, announcing that Payment Tokenization would be implemented nationwide on December 1. Since then, UnionPay from banks and third-party payment from individual companies adopted this technology. This move greatly has speeded up the development of digital finance and daily use of digital currency. Nowadays, under the lead of Alipay, China is undergoing a cashless revolution, which means people are transforming their consuming habits on basic necessities of life from physical payment to virtual payment. This made the technology of Payment Tokenization indispensable to protect personal data and private information. 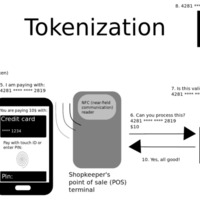