Originally an idea to organize “groups” on a nascent social media platform, the hashtag as we know it -- a “#” character used to tag, search, aggregate, and promote social media posts -- is credited as the brainchild of Internet Relay Chat (IRC) fan and Google-employee at the time Chris Messina. The idea to organize groups on Twitter slowly morphed into a folksonomic classification tool, and eventually a means to search, sift through, and rank the overwhelming number of social media posts as they are being generated in real-time, changing ideas about the agency and temporality of categorization. Trending Topics use # to encourage Tweeters to read posts about the posts that are being posted the most about. 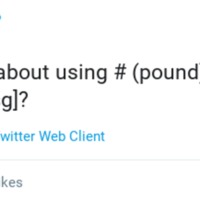