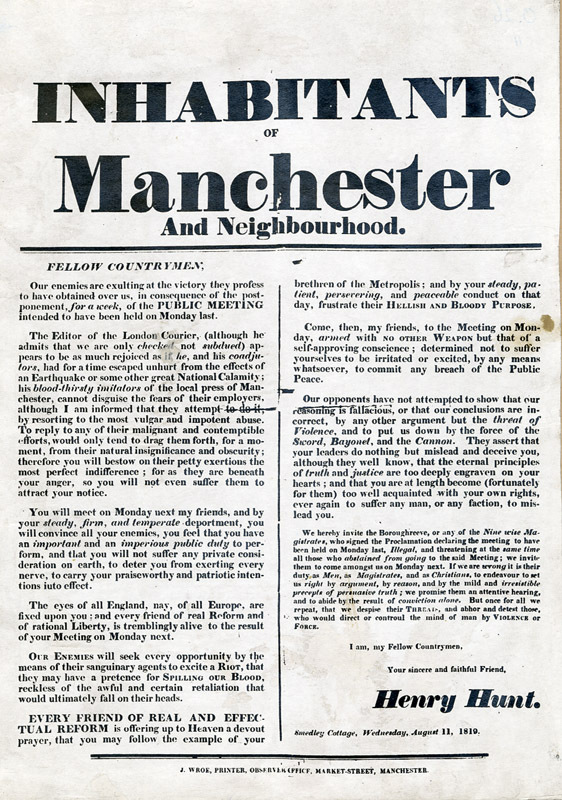 Date(s)
18th-19th century
Tags
Many To Many: A History of Platform Communities

The rise of influence of the religious/political “Platform,” as a physical location, did not always allow for the participation of the working class and the poor (Elkins 1980). There were restrictions on their time due to their labor obligations; attendance at meetings by radical orators could potentially lead to arrest and violence. The Peterloo massacre, which occurred in 1819, came about as direct a result of mass gathering at a public oration.

Hence, the broadside. While the technology itself had existed in a nearly unchanged state for centuries, it was during the age of reform that they took on new significance. As a distribution method for radical and reformist ideas promulgated not by the establishment but by the people themselves, the broadside formed an essential platform technology. Printed at high volumes by local presses, and untaxed by the heavy duties placed on newspapers, political broadsides were an essential technology for networking amongst participants in the public sphere.

The broadside was not only a political exchange, of course, but a cultural one as well. The ballad was a popular art form distinctly located in the cheap pages of broadsides long before the rise of the Enlightenment public sphere. Nebeker (2011) argues that ballad-printing and ballad-reading as facilitated by the broadside press had been responsible for the production of public spheres as far back as the 16th century, and most scholarship on broadsides prior to the Victorian era mainly concerns these artistic elements of the medium.

As the reformist and political aspects of the circulated broadside grew up alongside the ballads, constituencies with their own micro-climates of local elections played host to local networks propagated via print. For example, in Newcastle where contested elections were held and a larger-than-average population of free voters were able to participates, broadsides played an essential role in communication between voting interests: “it was possible in the heat of the contest to get out a response to an opponent’s broadside within hours of its appearance on the streets” (Barker and Vincent, 2001). 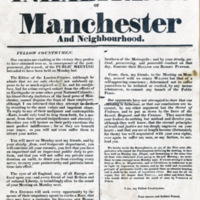