Date(s)
1826
Tags
From Industry to Information: A History of Memory and Storage

The first permanent image was taken by Joseph-Nicéphore Niépce in 1826. The work titled “View from the Window at Le Gras” is said to be the world’s oldest surviving photograph. To create the image, Niépce put a mixture of bitumen of Judea (a type of asphalt) on a pewter plate and left it out for 8 hours. Over that time the sun's reflection hardened the mixture and when it was rinsed off, the photograph was left behind. 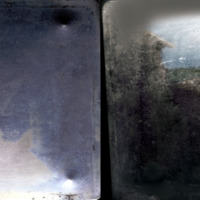