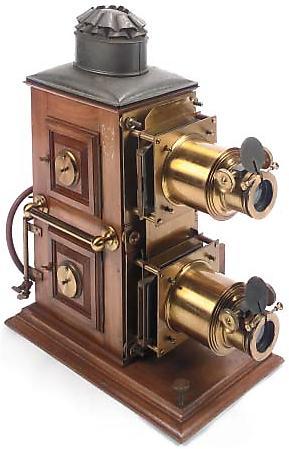 When thinking of magic lanterns, fine art education isn’t what necessarily comes to mind, however this technology served as a precursor to more modern day technologies, such as slide projectors and PowerPoint, and helped promote the use of photography as a means of disseminating imagery—and ultimately art appreciation—to a wider audience outside the walls of the museum. The magic lantern (Figures 1-2) started as a form of entertainment for ghost shows or demonstrations, however its uses quickly expanded with the introduction of photography and subsequently glass positives capable of being enlarged with the use of the lantern. The lanterns were introduced as a possible educational tool in France in 1839, however the low light from a burning candle made the projections hazy and not suitable for accuracy in color or clarity of image. Advances in photographic technology and light production helped secure its role in public lectures and publicizing images to an often times international audience.

Aside from these advances and refinements to the technology, the basic structure of the lantern remained relatively consistent. The lantern consisted of several key components including the lamp, reflector, condensing lens, lens tube, body, base, and smokestack (Figure 3). The lamp is the source of illumination and resides within the body of the lantern. Sources of light progressed from a candle to more luminous substances such as oil, gas, calcium, or limelight, and later electricity. All of these different substances produced varying degrees of light in both strength and color—lower candlelight produced a yellowish haze, while limelight produced a brighter, more pure white light. The reflector, located at the back of the body, reflects the light back towards the condensing lens, which orients the light through the slide placed between the body and the lens tube. The lens tube magnifies and focuses the image onto a screen or clean surface for the audience. The material composition of the body was extremely important both for the quality of the presentation and even the safety of the projectionist. The base and smokestack allowed for optimal ventilation to help produce consistent light from the burning substance inside and prevent overheating. Metal typically lined the inside of the body to absorb some of the heat from the candle and mahogany was the preferred wood for its stability and aesthetics. As magic lanterns became more complex, they soon incorporated multiple lens—biunials and triunials (Figure 4)—into the same lantern allowing a practiced projectionist to add special effects to his transitions, much like a PowerPoint today.

“The Art of Projection and Complete Magic Lantern Manual.” London: E. A. Beckett, 1893.

Hankins, Thomas and Robert Silverman, “The Magic Lantern and the Art of Illumination.” In Instruments and the Imagination, 37-71. Princeton University Press: 1995. 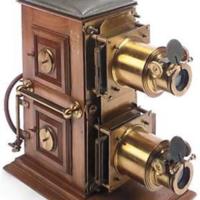 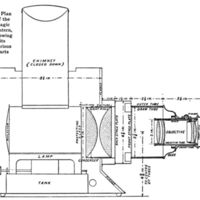 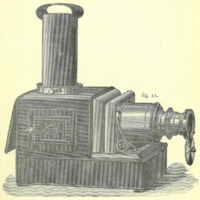 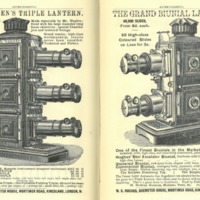