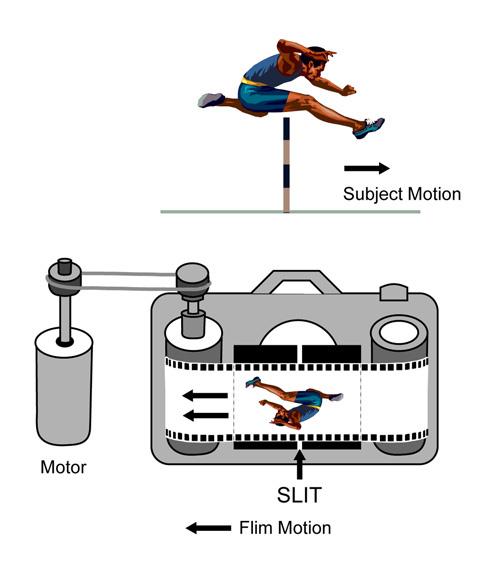 The method of photography known as strip photography is a technique that effectively captures high-speed horizontal movement by focusing solely on that which is moving in front of the lens and "ignoring" stationary objects. Objects in motion over time are seen laid over any stationary objects, which appear as horizontal strips. Essentially, this is accomplished by exposing extremely thin vertical strips of film in a row, and anything that is within the frame of the image that is still is seen continuously across the length of the exposure, whereas anything that moved in front of the lens is seen in its entirety.

Technologist Andrew Davidhazy describes one method of strip photography that involves masking the lens of the camera, which Tom Dahlin's visualization makes clear in the context of sports photography:


"It is possible to reduce exposure time and increase sharpness when image and film speeds are unequal by installing a mask inside the camera so that the normal 24 x 36mm gate is narrowed down to a 25 x 2mm or 24 x 1mm gate. This mask should be placed between the focal plane rails of the camera so that the distance between lens and film is not altered. The mask can be made out of any thin opaque material, and temporarily taped in place as shown in the drawing... Leaving the "slit" at one side of the frame allows one to quickly aim the camera's slit field of view at the desired spot in space where the action is to be recorded is to take place" (Davidhazy).

This technique directly soon to the development of “photo finish” cameras, which were useful tools in several aspects of racing sports. In addition to improving the reporting capacity of early photojournalists to decisively — and excitingly — show the winners of races, "photo finishes" became especially important in the lucrative horse racing industry. One might recall that horse racing had already had a relationship to early photography in that Leland Stanford and Eadweard Muybridge's project to study the gait of a horse led to improved techniques for capturing motion. This sport continued to have a relationship to photography in that "photo finishes" became necessary in order to regulate the race horse industry and crack down on cheating. This technique allowed track managers to determinedly show which horse was the winner of the race, rather than be manipulated or bribed by race horse owners into selecting their racer.

Many years later, this technique would evolve to become a crucial element of panoramic photography.

Sources
Dahlin, Tom. "Strip Tease: An introduction to the strip camera, how Tom Dahlin made his, and how you can too." Sports Shooter, SportsShooter.com, 18 Aug. 2008. 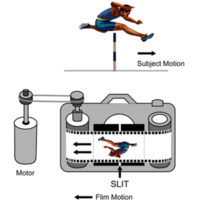