The Crimean War was one of the largest military movements ever undertaken for its time, a conflict between the allied forces of France, England, and Turkey against Russia in the Balkans. The allied forces had more casualties resulting from disease or exposure than they did enemy fire, and the British public was informed of these tribulations by the first newspaper war correspondents. Outraged, the policies, intentions, and leadership protocols of the government and its military were called into question, and there was pressure on the government to become more transparent about what was happening to everyone’s fathers or sons in a distant land. The army soon approached the Photographic Society in London for help, which is when Roger Fenton, a leading British photographer for his time, volunteered to go.
Fenton’s photography in Crimea was the first to document war and helped to establish war photography as a genre. He was working during a time that photography as a mode of journalism was still being architected and its immediate application as national propaganda had an effect on this. His pictures were intended to help shape public opinion, and therefore none of Fenton’s photographs include pictures of the battlefields, the dead or dying, or even the wounded or the makeshift hospitals.
All in all, Fenton’s “report of this war was singularly bloodless”. Fenton’s photographs include images of the occupied port of Balaklava, the campsites of the different allied military forces, and British barricades. Whether this was done from some sort of “Victorian sensibility about what was proper to display in a public medium that would be seen by women and children, or whether Fenton worked as an apologist for the British government” is unknown. Yet, what is important to note here is that the public audience at home was used to receiving “most of its war news in the form of rhetorical, jingoistic prose or in overdramatized, romantic sketches and wood engravings”. Therefore, “for all of its propagandist intent, the banal, unfinished, rough honesty of Fenton’s views and portraits would have been revelatory of war’s harsh realties”.
Fenton’s work in Crimea from March 1855 to the end of June 1855 (less than four months) helped him assume the mantle of a “’public witness’—one who sees and reports events not through the focus of his individual perception, but rather as an observer, a stand-in for the general polity. 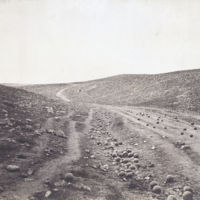